For a better understanding and to complete all those elements linked to the brand experience that influence the buying process, we will count with the collaboration of experts that will introduce concepts that will improve our business development, from different disciplines and points of view. Today we are pleased to introduce a text of Elena Rocchi, architect, artist and teacher.

All crabs have something in common: they all wander at the bottom of the sea. As they develop, their forelegs turn into two claws, which capture and manipulate the food, so they can be better at courting and fighting.

Claws are what I need on a Sunday afternoon stroll during Christmas time to get through the crowd at Passeig de Gràcia, one of the main shopping streets in Barcelona. I leave home in order to do some research and understand what people like and how people react when they face a shop window during Christmas time. How can a firm get the ones standing there engaged only with their shop window-stages?

Just imagine that you are going for a walk on a Sunday when you suddenly notice a shop window approaching. A group of people is standing in front of it. More people than expected. You think then about continuing without stopping, trying not to run over the people standing there. What should you do? The answer is relatively straightforward: you will have to stop.

You are by the boutique of a brand that was founded in Spain by a German craftsman specialized in leather working that arrived in Madrid in 1872 to learn from the Spanish leather industry: Enrique Loewe Roessberg. Enrique Loewe arrived in Spain in the late 19th century like many other German craftsmen that, since the 16th century, sought their fortune and, at the same time, wanted to undertake a training journey in Spain, France and Italy. Such was the success of Loewe in expanding his business by opening a leather goods workshop in the most commercial district in Madrid, in Lobo street, that in 1905 Loewe was appointed Purveyor to the Royal Household, and Alfonso XIII of Spain became his regular customer. Loewe started manufacturing pink frames écrasé, Moroccan leather jewel boxes and handbags, among others: a Leather goods factory E. Loewe. Príncipe Street, 39. Phone number 1.810. Man spricht deutsch. On parle français. English spoken. Established 1846”).

Over the same years in which Mariano Fortuny produced exotic fabrics in Italy, “Loewe, fiel a la piel” (“Loewe, faithful to leather”) remains faithful to its original philosophy. In Spain, where the firm is renowned for the quality of its lambskins, he finds the “Cordero entrefino español”, which refers to lambs bred in the cool heights of the Spanish Pyrenees.

As we were saying… You are standing in front of a shop window from the boutique at Passeig de Gràcia, 35, first opened in 1940 by German Loewe Knappe and relocated to Passeig de Gràcia from Carrer Ferran (Ferran Street), the second boutique from Loewe opened in Barcelona, after the one in Carrer Fonanella (Fontanella Street). Javier Carvajal was the architect that during 1960s conducted a study about Northern interior design transformed into “Spanish” by using walnut. Designer Vicente Vela not only added many different colors to Loewe’s leather, but he also shaped the firm as a “crab” in 1970. However, the precursor of Loewe’s visual merchandising back in the 70s was designer José Pérez Rozas, as he was the one that first brought such an ephemeral art performance to its shop windows.

Since 1980s Loewe has brought together through its Foundation writers, painters and philosophers as aesthetic consultants of the firm, in order to know how to proceed when selling “Spanishness” of the brand in the world, especially in Japan and in Asia-Pacific. Loewe does so by including “shawls with motifs from Velásquez or the Gala fragrance in the form of a Menina (Spanish for “Maid of Honour”), as said by Luis Antonio de Villena, one of the consultants of the Foundation, which was founded in 1988 by Enrique Loewe Lynch (the fourth Loewe generation).

Since you have stopped when trying not to run over the people standing in front of the shop windows from Loewe, you suddenly see a flying rabbit and a world map in the shape of a rotating watermelon next to some handbags, when looking at the show window. Standing right next to a group of women taking pictures of the still life of Loewe, you will be astonished and fascinated by the flying rabbit. While wandering at the bottom of the sea, the crab has caught it with its claws. The crab begins to court the rabbit; he captures it and will eventually manipulate it like the best comfort food.

Stuart Vevers, Loewe’s current creative director since 2008 and the author of the brand’s rejuvenation, explains that the “good practice” of the firm in regards to its shop windows-still lifes for Christmas time in the 20th century results from some ancient and classical codes and aims at pursuing the key principle “A luxury firm must cause tachycardia on its customers”. If the famous advertising campaign “Quizás, quizás, quizás de Loewe” (“Perhaps, perhaps, perhaps by Loewe”) by Eugenio Recuenco focused on the “Spanish traditional character”, seduction and social valuation, what kind of tachycardia should cause the new shop windows-still lifes at Passeig de Gràcia in Barcelona? Every still life has an allegorical and symbolic meaning in their general iconographic messages; Loewe takes up such messages again in this year’s Christmas campaign. And if Leonardo da Vinci’s still lifes show genuine interest for the new-enlightened world, at what new world do the handbags and wallets made out of “Spanish cordero fino” leather aim?

As in the finest still life tradition, the shop window represents natural inanimate objects from our daily life or inanimate objects created by the human Loewe. A gold baroque frame determines the space of the shop window on a black rigorous background. The lighting highlights the symbolic value of the message. Furthermore is Loewe’s still life animate. The flying rabbit wings (probably in its resurrection) and the rotating watermelon-world map appoint Africa as the world’s future. They move.

Based on the belief that objects become “Real” at the other side of death, in case the pharaoh may need them, the still lifes made of food and domestic objects are born for the first time as interior decoration for the tombs in Ancient Egypt. Through baroque paintings, still lifes celebrate the “Vanitas things” (XXX) that death snatches from us when we all become equal. Omnia mors aequat (“Death levels all distinctions”). The genre of “Vanitas” still lifes has to do with the Thirty Years’ War (1618-1648), where many European countries went bankrupt and the economy collapsed. In this context, still lifes try to forget about the crisis by representing vanity and wealth in its fleetingness. The Spanish version here refers to an impoverished country from the 1600s, since the gold found in the American colonies was not invested in a productive way: the Spanish still lifes by Juan Sánchez Cotán had a “lack of food”.

Right in front of the hyperrealist shop window where you are standing you can see these new skilled Zeuxis and Parrhasius and their Trompe-l’oeil. Pliny the Elder appointed the Greek painter Peiraikos as “the painter of vulgar objects” and his works as “a group of delicious things sold at higher prices than the greatest paintings of many other artists”, just like Loewe’s still lifes. Wealthy Loewe financed a new collection with new types of leather. But this time there are no moral messages in his “Cabinet of Wonder”. What would you say there is instead?

Through “World’s disillusion, Vision of a Knight” from 1670, painter Antonio de Pereda explains probably better the disillusionment shown in Loewe’s shop window. While sleeping, an angel appears in the young boy’s dreams and warns him. Here the flying rabbit is warning you. “Aeterna pungit, cito volat et occidit” (“Eternally it stings, swiftly it flies and it kills”). A bit higher than your eye-level the flying rabbit reminds you of Lewis Carroll’s March Hare at the Unbirthday Party in Alice in Wonderland, and, just like Alice, you are a subgenre in this Tea Party. You are the one celebrating on your Unbirthday; on the day of your death. Only your teeth are lying among this setting of Loewe handbags, watermelons, crabs and key-chains. You are not there anymore. And this all reminds you of the fleetingness of life. Omnia mors aequat (Death levels all distinctions). The Trompe-l’oeil is misleading you, but if you look a little bit closer at the reflection of the shop window you will see that you have no longer multiple points of view; you are now standing in front of your own point of view, where your face is now at the height of the plastic teeth.

The severe austerity in Spanish still lifes is probably what Loewe identifies with the “being Spanish” concept and what would best represent Spain in form of a souvenir to bring back home. But when this is translated into Loewe’s shop window by introducing the brand’s luxury and you in your impermanence, Loewe develops a new technique that goes beyond the boutique. As in the Pop Art-still life “Campbell’s Soup Cans” produced by Andy Warhol, the modified image of the product and your critical view as a consumer, as well as the fact of being temporarily alive, constitutes its real matter.

Ready to wear. Only for a while. Before the Tachycardia.

Stuart Vevers knows these are hard times. And his “good clinical eye” points to the impermanence. Albert Puyol, former president of Loewe, says about the enfant terrible:  “Some people, like Marc Jacobs, John Galliano or Stuart Vevers, perceive life in five different dimensions, instead of perceiving it in two. They see the world through a hole, which turns to be the hole we all eventually see through”.

A whole we all go through in our Sunday stroll in the fifth dimension. Now, honestly; do not forget to take a Loewe handbag for your trip.

Ready to wear. Only for a while. Before the Tachycardia. 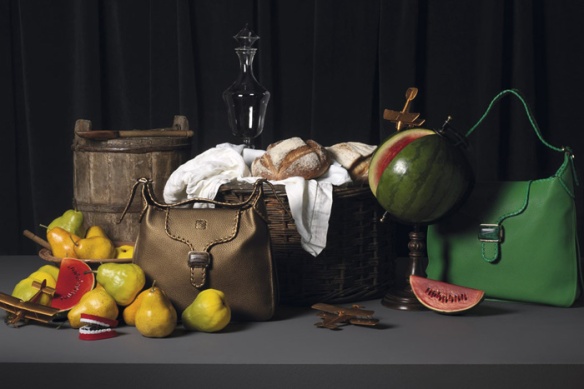